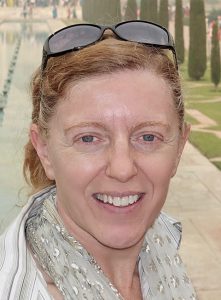 Laura Hammond has been working at University of Wisconsin-Madison since 2003. She is the U.S. Director of the American Institute of Pakistan Studies (AIPS) and the Founding Director of the Language Program Office at the University of Wisconsin-Madison in the International Division. Her career working with South Asia programs at UW started with the South Asia Summer Language Institute (SASLI) in 2003, and she began working with AIPS in 2006 and became the U.S. Director in 2010. In addition to her work with AIPS and SASLI, Laura has been the US Director for the American Institute of Bangladesh Studies (AIBS) from 2008-2019.

Laura was instrumental in bringing in new international/language programs to UW. In 2012, she became the Executive Director for Project Global Officer and (in 2016) and became the Administrative Director for the South Asian Flagship Languages Initiative, followed by adding to her directorship the Indonesian Flagship Language Initiative in 2018 and the Turkish Flagship Language Initiative in 2020. Due to the strength of these programs, Ms. Hammond was selected by the Dean of the International Division to Direct the Language Program Office in 2020, and in April of 2020, she received the UW Chancellor’s Award for Excellence in Leadership.